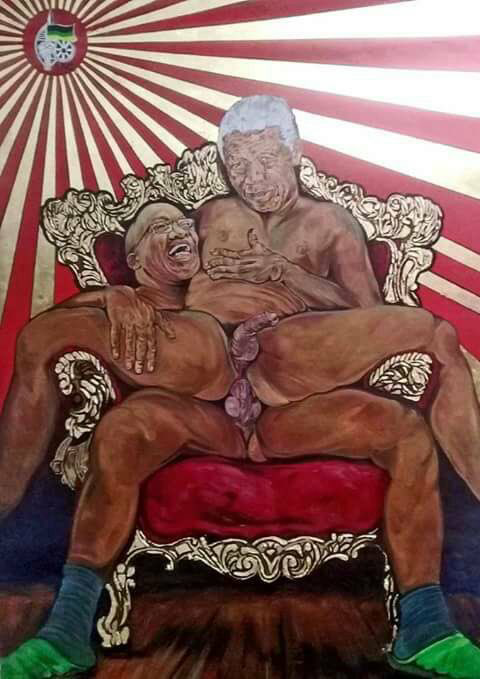 I know the Penis has had more than its fair amount of airtime and being discussed. But South African Artist Ayanda Mabulu has released yet another of his vulgar political portraits… This time featuring the president Jacob Zuma and Former President Nelson Mandela engaged in penetrative anal sex.
People have reacted as they always do… Often without analysing the painting,  which is a phenomena that has now materialised into our physical world and has repercussions. The common response seems to be, “I should not have seen the picture, I do not wish to see it again”. This is obviously due to the obscene nature of the portrait… But is this looking away beneficial for a society such as ours, that requires of us to be analytically critical of our society and the happenings within? What is art, what is protest art?

In the long history of the Art of Drawing Penis’ (I could also use Penii), It’s the noticeable small Penis in ancient greek sculptures that is obvious to the memory of an uncultured working class art enthusiast such as myself, who buys art because that’s what celebrities do.

You see… The Greeks, associated small and non-erect penises with moderation, which was one of the key virtues that formed their view of ideal masculinity. Mandela, now branded a sell out by many, for negotitiating a settlement that kept in place the stronghold of white monopoly capital on the Majority black nations economy. The negotiated settlement was an act of moderation, a half measure of sorts. and by the powers vested in me by interpretation, the smaller limp Penis endowed for Mandela may mean the above, symbolically. Mabulu went from Drawing non erect penises on Zuma, to drawing hentai type veiny mandingos in the pornography of power 2016. This also cannot be coincidence… The erection is another symbolism of yielding power as are all phallic symbols… And the last two paintings from Mabulu have noted the rise in power of the president Zuma and his politic… This is not necessarily a bad thing for the working masses… And hence the non-chalance of Madiba, even the sexual suggestion of grabbing the nipple is a fascinating addition.
Mabulu hates Zuma and probably the ANC… Trust me… He makes it obvious. It is maybe this hate that fuels his vulgar approach. I use vulgar as a description not as judgement. But it is this vulgarity that he seeks, this is the response he wants. In a conversation with Thabiso Tima, homeboy spoke how he neglected to draw abstract and metaphorical works based on the western art theory… Because his core target audience who are largely black and uneducated in the intricacies of visual Art, would not understand or appreciate the metaphors. But Zuma fucking Mandela is a metaphor for Zuma is fucking with Mandelas Shit (this is not very mature of me, but that’s the first thing that came to my mind. If he the Artist Ayanda Mabulu, cared not for metaphors, he should’ve drawn Zuma with a wrecking ball destroying or something, I don’t know, even that is a metaphor. 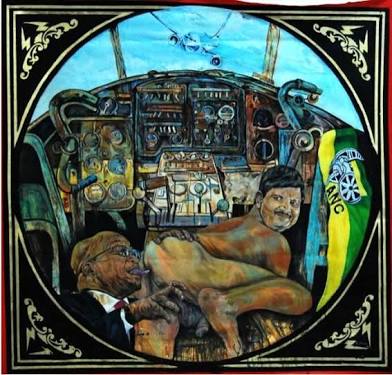 “The work is really aimed at the masters who are controlling our leader. And the Guptas are one of those masters. It’s not personal because it goes beyond the president‚” Mabula explained in an interview about the above.
Why are we so prone to offence? So offended by a thing that any rational interaction is impossible, no discussion… It’ll disappear. In the a series of Artworks, one of the Gupta brothers has their asshole licked by the President… But focus and disdain of one part of a painting is distracting one to see the plane headed for a collision course in the cockpit window. Is it because the pictures depicts homosexual acts and for a long time we were bred to hate mindless male homosexuality and it’s anal sex? Is it because our hero’s cannot be compromised in such carnal exposure because their genitals surely more sacred than the rest? So many questions, but the questions are necessary, unlike the vulgar paintings… Sometimes.